Here it is! The first official blogpost from the blog team! I’m the first one to start with a cute Nivalis hack! Want to know more about my fellow bloggers? Check them out here. 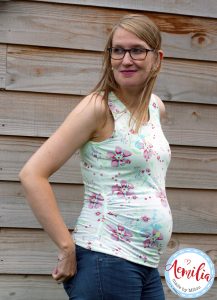 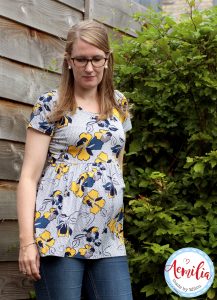 The Nivalis was my first Sofilantjes pattern and I’ve already made quite a few dresses with it. I’ve changed up the color block-option, but also the collar. The original pattern is already so versatile. But, let me tell you, there is more!

At the end of November we are expecting our first baby, and what is a better reason than that to sew up some new clothes? I was looking for shirts that were comfortable, but also fit nicely. So I choose the Nivalis as a starting point because I like the way the neckband sits as well as the fit of the sleeves. 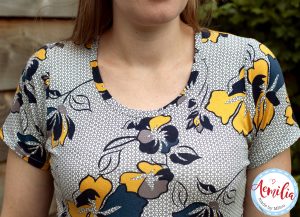 I’ve chosen two make two versions, one with and one without sleeves. The one with sleeves is inspired by a peplum-style top I saw on Pinterest. 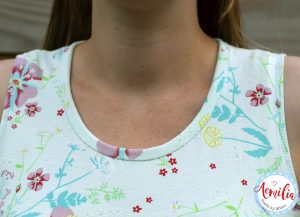 For that first model I’ve used the top part of the pattern, drawing it just below the waist. I chose to make it short-sleeved, as it was in the middle of summer at that time. The top part was sewn as described in the pattern.

For the peplum part I took 1.5 times my waist measurement and gathered it using clear elastic (framilon). The peplum was then pinned to the top, with right sides together, and sewn with a stretch stitch. 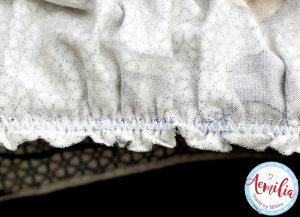 For the second top, again I used the top part of the pattern but now drawing until hip-height. Then I extended the front panel with 5 cm around the belly area, but in hindsight I would advise at least 10 cm. 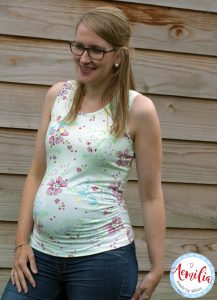 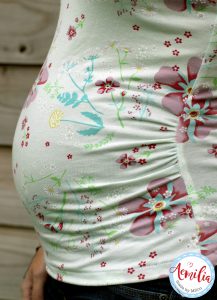 The extended part was then gathered, again with clear elastic (framilon), making sure the side seam would match the back panel again.
The top was assembled as was written in the pattern. As this version didn’t have sleeves, I’ve hemmed it with a stretch stitch.

And now I have two tops I wore a lot during the summer. The autumn is almost here, so maybe a version with long sleeves isn’t a bad idea, who knows!

Thank you for visiting

Thank you for visiting our website. This website and all its content are copyright protected. Please ask permission before sharing any pictures or articles, especially when a child is shown in the image.

REGISTER FOR OUR NEWSLETTER

Link Up with the Link Bodysuit and Cami